skip to main | skip to sidebar

The founder of KISS comix 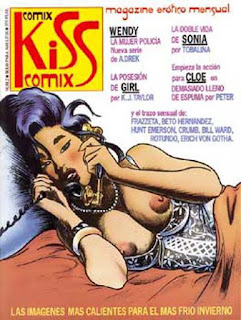 Last week the publisher of Spain's KISS Comix, Jose Maria Berenguer, died. It seems that lately most of my updates are about the deaths of people who were important to me and I feel it's necessary for me to write about it. But I seriously hope this is the last death entry for a very long time.

Last August I wrote about the end of KISS Comix with an interview with Sr. Berenguer where he mentioned a lot of the artists who have contributed to the magazine and failed to mention me. Now, I have to own up to the fact that I was a little peeved at that and I even thought about just deleting the post so I wouldn't seem petty about the oversight, but I decided to leave it. We're all slaves to our emotions sometimes, so I'm sure you all understand.

Like every artist/publisher relationship since the dawn of time, we had our differences. I mentioned at the top about people who were important to me and he was. He started the first Spanish erotic anthology magazine and invited me on board just as the first GIRL series was wrapping up. It's too bad that both of La Cupula's magazines, EL VIBORA and KISS Comix, had to end, but apparently Sr. Berenguer had been battling cancer and I guess he couldn't keep them going. But 20 years is a pretty good run for a magazine. The cover above was my first and it was the second issue.

Sr. Berenguer was a good man and we had some great times. Like I mentioned, we had our differences, but I never lost my respect for him.